European Commission proposes €100B for next research programme

02/05/2018
Horizon Europe is one of the few current EU budget lines to get increase in seven-year proposal.

The Horizon Europe programme would be one of the few programmes benefitting from a budget increase. Actually, the EC’s seven-year proposal foresees in parallel cuts in the two largest EU spending programmes, i.e. the Common Agricultural Policy and the European Structural and Investment Funds (Regional Aid), down 5 and 7% respectively.

EU research officials say they are very satisfied with the Horizon Europe increase, even if it is less than the €120 billion asked for by the European Parliament, and the €160 billion hoped for by lobbyists. 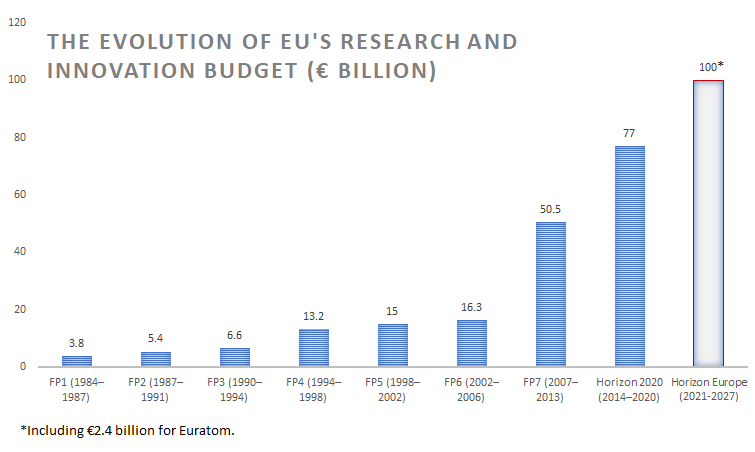 Other budget lines going up are the Erasmus+ student exchange programme (doubling, to reach €30 billion) and defense-related research (going from €90 million to €4.1 billion).

Even if it is less than asked for by the European Parliament (€120 billion), EC’s proposal for Horizon Europe remains impressive, given that the UK – one of the biggest contributors to the EU budget (around €15 billion) is for the time being no longer contributing to such a budget, and that the official proposal discussed end of April hardly reached €85 billion. This figure could even grow if the UK and non-EU countries such as Israel, Norway and Switzerland decide to join the programme again and to contribute to its budget.

Don't miss any of our R&D calls.

19/04/2021
DigiFed launches its third Open Call for companies across Europe to digitalise their products and services
DigiFed opens its third call for applications to boost the adoption of advanced digital technologies for European SMEs focused on non-digital businesses.

12/04/2021
ZABALA is celebrating 35 years!
In 2021 it will be 35 years since this company began to walk the path of innovation together with companies, technology centres, universities and public administrations. Join us in the digital space that we have dedicated to this anniversary, we are waiting for you!

31/03/2021
Exclusive: How are European countries channelling NEXT GENERATION EU opportunities? Spain vs France
We continue with France the series of weekly articles entitled 'How do European countries channel NEXT GENERATION EU opportunities?' Written by Daniel García, director of the offices in Extremadura and Andalusia (Spain) and expert in European innovation programmes.